Who Is Jesse Cutler Or Is It Gibaldi? ™
By: Andre Izquierdo

He was very rooted to an Italian heritage, his only sister Leonora lost the battle with Ovarian Cancer at age 49, and little “Chuckie,” a boy from Brooklyn, had become good at being a chameleon. In fact, he had lived a very successful life reinventing himself many times, being that he was a man who understood what it took to be a star. 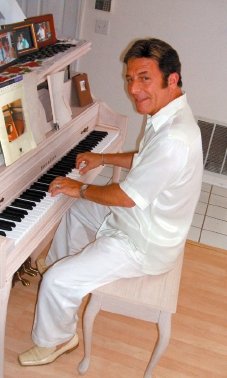 As a kid he used to perform “Malaguena” to entertain friends and family, and his great talent was something that was inherited and flowed through his veins. His grandfather, Joseph Guarneri, from the bloodline of one of the best violin makers along with Stradivarius, was one great example of the family abilities, but music was not the only area in which they excelled.
They were also a family of patriots who served the nation for many generations. His cousin, Colonel Richard Milo Gibaldi, was retired Air Force and an O san base commander in Korea. He then transferred and worked at the Pentagon for the last twenty years in information technology services and counter ntelligence. His brother, Lieutenant Commander Joseph Gibaldi, a Top Gun pilot, who led the raid on Libya in the late 80’s.

His father gave him a passport out of mediocrity, a magnet for attention and love. “A Tian amen” (the door for eternal peace). One guitar, his modern sword, the Universal Language of Love.

His mother wanted him to be a dermatologist though he chose Hofstra University for a Law degree. He was an entrepreneur, a publisher, and produced several TV shows in his past, and a philanthropist who raised money for many causes, including the Hassidic Jews in California in the 80’s.

He is who he wants to be and is comfortable with himself. He has lived with the price that fame brings. He is a walking book of memories. A very personable man who understands time just as the gifted known and vowels flow from him like the music transporting you to a virtual reality of show business in a way you never dream from 1964 to 10-01-08.
His first book, STARLUST: The Price of Fame, the first in of a series of three, was generously sponsored by American Idol (FOX Interactive) and Morgan James Publishing. A survival guide for anyone who wants to be a celebrity, StarLust is for all ages and almost anyone who can relate to the many chapters that outline a true history about life in the world of celebrity and stars who are still unnamed, unknown and unrecognized.